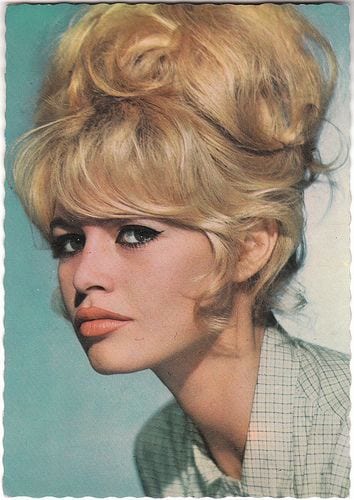 Trends come and go as what might be today’s hottest new look can be easily forgotten as soon as next month. However, that’s not always the case as there are some famous hairstyles that have stood the test of time.

For example, we can all easily recall Audrey Hepburn’s iconic hair in Breakfast at Tiffany’s. Or the famous Twiggy pixie cut. Or even the Marie Antoinette pompadour. Some of these styles are more for special occasions, others are less common, and yet so many more you can still rock nowadays.

So continue sliding to check out and see some of the most famous hairstyles of all times. Who knows, maybe you’ll find your next style or at least adapt one of them to fit your tastes.

Flappers were the style icons of the Roaring Twenties. This was a period of social awakening, turbulences, craziness, and living life to the fullest pre and after the wars.

Women in the 20s bobbed their hair, wore short skirts and dresses, and listened to the then infamous jazz. They were also more entitled and out-going and free than their predecessors.

The so-called Eton crop was the shortest of the short bobbed haircuts worn in the 20s and 30s. It got its name from the famous high-class English university as its male students used to wear their hair slightly longer than the norm.

The hairstyle was also later adopted by women, but for a short period of time. Most that would have had to possess a great deal of confidence and will; this style attracted social commentaries and even mockery at the time.

The Victory rolls are an instantly recognizable and iconic vintage look. They are one of the most famous hairstyles of the 40s and are generally associated with the war and the women’s efforts in it.

Although their exact origin or when they first appeared is still unclear, the Victory rolls were adapted for both everyday and formal wear. In general, they were considered both a feminine and practical hairstyle.

Bettie Page was considered the “Queen of Pin-Ups” in the 50s and she is one of the symbols and women that paved the way towards freedom of expression. She had a cult following then, and she is a style icon now. Her raven locks and blunt fringe are still a great style to wear nowadays too.

You can see them on rockabilly and burlesque ladies especially. They were also worn by celebrities such as Dita Von Teese and also Katy Perry – at one point.

Marilyn Monroe is a style icon and it is so very hard to choose just one of her many iconic looks. There’s the famous white dress and the pink one and diamonds. There’s also the blonde bombshell appeal, but we chose to go with this one.

We just love how relaxed and laid back Marilyn looks in this picture. Admire her wearing blonde bouncy short locks and minimal makeup.

Let’s make an experiment: what’s the first thing you think about when we say Birkin? Is it Jane Birkin, the actress famous for her roles in French and English movies? Or is it the Hermès Birkin bag that, you guessed it, she inspired?

We’d say you recognize the name because of the Birkin bangs or the set of full bangs and straight long hair – that she used to use wear, made famous, and now bear her name. It was one of the go-to styles of the 70s.

7. The Brigitte Bardot Hair and Bangs

Brigitte Bardot is an immediately recognizable style icon as the French actress was the embodiment of the sultry look with her pouty lips, surprising teeth gap, and general beauty.

She also sported and popularized this long and wild updo that incorporates voluminous locks and of course, the now so-called Bardot bangs – a pair of wispy center-parted bangs.

Jacqueline Kennedy Onassis is one of the best known First Ladies of America and she is particularly well known for her classy and classic style and elegance.

A source of inspiration to the women of the 60s, Jackie O. made the bouffant style the go-to haircut and styling choice of the decade, especially among mature women.

A muse of the 60s, Mia Farrow has quite the interesting tale about how she went from long, straight and flowing blonde hair to a pixie – one of the original ones at that, too.

The story goes that Farrow cut her hair with a pair of fingernail scissors and that Frank Sinatra (her lover at the time) loved her look and was one of the reasons why she decided to go the pixie way – and rock it!

If you didn’t know about the Farrah flip before, then you definitely heard about it thanks to Stranger Things‘ adorable Steve and his perfect hairstyle secret.

Jokes aside, Farrah Fawcett became famous for her blonde feathered waves that made her the quintessential image of the California girl. It also helped Farrah land a role in Charlie’s Angels and transformed her into a style icon – and gave her a shampoo line of her own too!

It is hard to say what’s the most famous element in this picture: the great Audrey Hepburn, the famous Breakfast at Tiffany’s movie, or the iconic long hair updo – a chignon made even more special by the diamonds tiara?

This is also just one of the many hairstyles that Audrey Hepburn’s has worn throughout the years as she also went for a pixie cut – in both Roman Holiday and in real life – and also wore her hair really long or in a bob.

There are so many ways to wear and style a pixie cut, but few are as famous as the Twiggy one named after the famous British supermodel. She was a style icon and a muse of the 60s and 70s as, besides her super short pixie, she was known for experimenting with her makeup and look too.

Shirley Temple became famous for being the youngest Academy Award nominee and winner and also for her big curly head of hair – all 56 of them.

Her look can easily be considered a staple and source of inspiration for curly-haired girls and ladies everywhere!

Angela Davis is among the most famous women to sport an afro and a true leader. She is one of the leaders of the Black is Beautiful and Black Power movements and her wearing an afro inspired many others to do the same.

The afro hairstyle became a top trend and is now considered and widely associated with the 60s and 70s period. You can sport one and look just as fabulous today as well – and feel proud while doing it!

The singer-actress is world-famous for her voice and looks and anyone that’s seen her movies knows she sported a variety of hairstyles. However, her arguably most famous one is this ultra-long sleek style that, you guessed it, many women came to adopt as well.

Sleek and straight hair gave way to big, bouncy, and pouffy as the 70s turned into the 80s and the perm became the hairstyle of the IT girl and generally, all fashion-forward women of the time.

After winding down in the 90s and early 00s, the perm is slowly but surely making a comeback this year, but in a modern and safer for your hair way.

Meg Ryan is one of the biggest stars of the 90s movies industry (especially romantic ones). This sweetheart also inspired everyone and came out wearing what would later become her signature look and one of the most famous hairstyles of all times: the shag.

While she did not invent it, the shag surely spiked in popularity as Meg Ryan you could be equally edgy and demure while wearing it.

Friends was and continues being one of the most famous TV shows of all times. Among its many memorable and very much cited catchphrases and moments, there’s also one hairstyle that really stood out – the Rachel.

Named after Rachel Green, the character played by Jennifer Aniston, many women adopted this hairstyle. However, the actress herself famously revealed that she actually hated the way she looked with it.

It is still easy to recognize members of the hippie counter-culture by their long, flowing locks and particular style of clothing. An important movement of the late 60s and of the 70s, they were all about the peace, love, and freedom.

Nowadays, their style of clothing was imitated, modernized, and is arguably more popular than ever by the boho style. You can find traces of it everywhere from festivals to day-to-day wear.

A role model to many a woman, Princess Leia is just as famous as her male counterparts and a very important character in the global phenomenon that is Star Wars.

While she sported many different hairstyles, her cinnamon buns are arguably the most famous look and an instantly recognizable one. You can use this as inspiration next time you decide to go for space buns.

Nowadays, unconventional hair colors are viewed as a way of expressing one’s personality and are slowly becoming more accessible and accepted in all environments. Probably thanks to the many ways in which you can wear them.

However, P!nk shocked us all when she first came out with her, what else, bright pink and spiky hair that turned into a signature look and set the path for many other great unexpected hair colors.

As we’ve shown you in a different article, there are very many ways in which you can wear your hair in a bun, but the ballerina bun is definitely one of the most elegant ones.

This great style took a leap from the ballet stages and on to the streets as, after being made popular by ballet dancers, it was slowly adopted for everyday use (or special events one) too.

These are yet another type of counter-culture, ones just as easily recognizable by their hairstyles as the hippie style we talked about a bit earlier.

In their heyday, you could easily recognize an emo girl by her bangs, a punk one by her spikes, the goth look by its dark colors and scene hair for its vivid ones. And that is putting it very, very generally.

The bob and its many variations – long, angled, cropped, asymmetrical – is easily one of the most worn and loved hairstyles of our days and ages.

However, did you know that it was just as popular and loved back in the 20s? Louise Brooks, for example, was extremely famous for her bob and is generally considered a role model in terms of short bobs.

Perhaps one of the most simple and yet efficient hairstyles out there, you can’t deny that the ponytail, especially high ones, deserves a place on this list of famous hairstyles.

Women have been wearing them for ages and have done so in the simplest or the most intricate of ways. There’s no other fast hairstyle that’s as iconic as a ponytail, perhaps just the messy bun.

Ready to Change Your Look?

This was it, our list of famous hairstyles that were a turning point in the history of hairstyles.

These either mark and are the definition of a decade – think the flapper styles or the Victory rolls – or were made famous by the person wearing them. In most such cases, they also wear their names – think Brigitte Bardot or Jane Birkin. Either way, they all deserve their hairstyle celebrity status.

So, which of these iconic and famous hairstyles are your favorites and how many of them would you wear? Comment and let’s discuss!