80's Hairstyles That Will Fill You With Nostalgia - My New Hairstyles 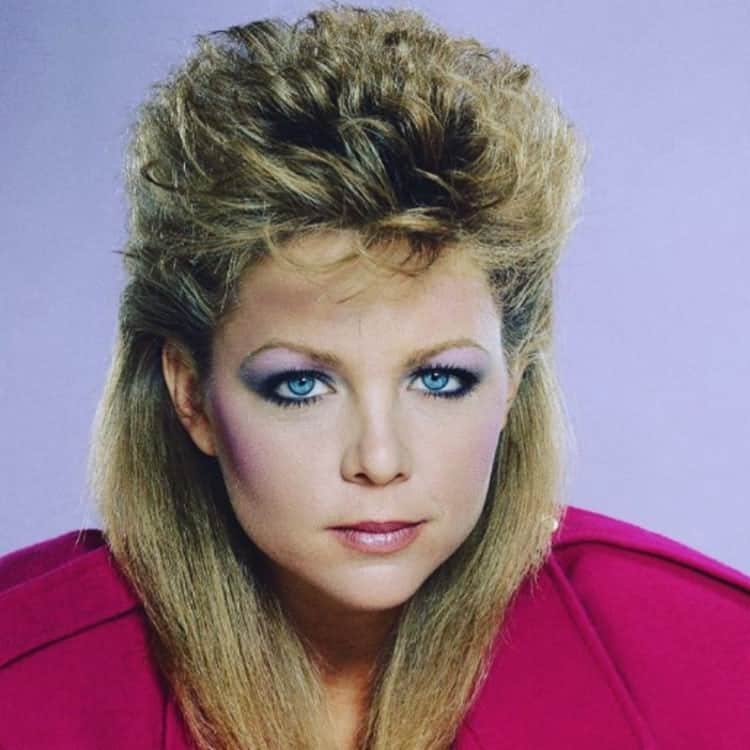 They say some things should remain in the past, but fashion and hairstyles are among the exceptions that come full circle! Whether it’s flare pants from the 70s, 80s hairstyles, or 90s fluorescent workout gear, retro looks will always hold a place of nostalgia in our hearts!

So, if you are preparing for a 80s themed party, want to reinvigorate your look with a retro hairstyle, or are just interested in trying some online tutorials for 80s hairstyles, look no further! We have gathered all the information on the most infamous styles and looks of the era, and how you can achieve them!

What Are 80s Hairstyles?

Simply put, 80s hairstyles are the iconic looks for men and women that rose to prominence during the 1980s. From the Whale Spout, to crimping, to perms, the 1980s saw a hair revolution that welcomed individuality and expression.

Who Are the Hair Icons of the 80s?

The well-known game-changers for 80s hairstyles were mostly female musicians. These women pushed the boundaries of their appearance and created looks that are still popular today:

What Are the Best 80s Hairstyles for Long Hair?

Crimped hair, or large, frizzy curls are the volume and fierceness many current celebrities with long hair, like Beyonce, are bringing back!
Another popular favourite that is still relevant for anyone with long hair, is the “perm”. Perms transform any head of hair into a crown of bouncing curls and volume!

What Are the Best 80s Hairstyles for Short Hair?

The “Madonna Wrap Up”, Olivia Newton-John’s “Teased Bangs” and even Cyndi Lauper’s “Feathered Hair” are some of the most famous 80s hairstyles people with short hair rocked which are still influencing our style today!

The “Madonna Wrap Up” is a signature look for short hair, where a thick piece of fabric tied into a loose bow around the head and the short hair is teased and curled up underneath. Olivia Newton-John’s straight bob was framed on top by teased bangs, and Cyndi Lauper’s feathered hair was heavily teased, with wispy locks flying in every direction.

We combed the archives online for photos of 80s celebrities, 80s trendsetters, and 80s hairstyle magazines to create our top picks for the best 80s hairstyles that existed and the ones which have made a fashionable comeback!

The whale spout was an all-time favourite for a whole generation of women during the 1980’s. This hairstyle was partially created out of desire for something different from just a regular pony tail, plus the whale spout provided a bit of clever thickening and volume to the wearer’s hair. It styled by tying up the top portion of your head as you would with a normal pony tail with a scrunchie or clip and then letting it flow out the top like a fountain, or a whale’s spout.

The result looks like a party on top of your head and was that quintessential 80’s style where bigger and better was the motto. The whale spout can also be worn with bangs, which was made popular by such stars like Debbie Gibson.

The feathered hairstyle was extremely sought after in the 1980’s, and with natural beauties such as Farrah Faucett effortlessly rocking the hairstyle, many people around the world couldn’t help but try to imitate. Both men and women would struggle to perfect the hairstyle’s iconic feathered wings on the sides of the head, complete with a part between the bangs and layers of curls frozen by hair spray.

The feathered hairstyle was better suited to people with naturally straight or wavy hair, and after you had the perfect cut, the hair would be brushed back over the side in a manner resembling a bird’s feathered wings. This hairstyle reached a phenomenal level of popularity, with many celebrities wearing the look, including Rob Lowe, Princess Diana, Heather Locklear, and Michelle Pfeiffer.

The 1980’s represented the birth of punk culture, so it’s no doubt that soon a hairstyle representative of that movement appeared on the mainstream fashion circuit. Punk rock styles of hair were backed by new genres of music and a entire generation of youths wanting to break free with tough-looking, leather, ripped and studded clothing. Naturally, the bizarre and wild hairstyles of the punk rock culture became the perfect fit with innovative uses of colour, spikes and mohawks.

One of the reasons punk rock looks became so popular is that it became a platform for young people to express their individuality, and any hairstyle that had classic cuts like parts would be considered boring. Nothing screams wild 1980’s like Cyndi Lauper and Madonna rocking a punk rock hairstyle.

“Business in the front, party in the back” is the popular description for this classic 1980’s look, and this is arguably the most infamous hairstyle of recent memory. Mega stars such as David Bowie and Paul McCartney were among the first to rock this hairstyle as far back as the early 1970’s, but the mullet didn’t truly hit its height until the mid-1980’s.

Love it, or hate it, the mullet has definitely been the subject of much derision over the years, but there is no denying its popularity at the time among both men and women, with both curly and straight-haired variations. In fact, the origins of the 1980’s ‘fe-mullet’ might have been Prince himself, who rocked his version of this style with curls in the era of Purple rain.

This unconventional look has sometimes been described as having just been electrocuted. However, descriptions like that didn’t stop this hairstyle from completely replacing the long, straight, and sleek hair of the 1970’s. Those gifted with naturally curly hair were encouraged to tease and hair spray it to incredible heights, while those with straighter hair did everything they could to do the same.

As a result of this hairstyle trend, the ‘permanent wave’ was created, which is a process of chemically altering the hair in order to make small and tight curls. You might have heard this referred to as the ‘perm,’ which in turn formed its own unique style that became insanely popular amongst youths and adults alike in the 1980’s.

If there is one hairstyle that screams 1980’s, it’s anything with volume. Big hair is a hairstyle that empathizes large volume or largely styled hair; especially those that make the hair occupy large amounts of space all over around the head.

Even though this hair style was labelled ‘big hair’ in the 1970’s, it soon rocketed to the height of fashion during the 1980’s with actresses such as Raquel Welch, Brigitte Bardot, and Jane Fonda becoming big-haired icons. This decade saw the onset of huge, voluminous hair on both men and women in the form of long and sometimes curly looks.

This particular hairstyle had its origin back in the 1960’s when the great counterculture movement grained traction with the introduction of the hippie style into mainstream fashion. Inspired by Woodstock, war protests, and The Summer of Love, the look itself started out fairly simple with men and women growing out their hair into long, natural and unkempt locks.

This directly challenged the structured, conforming styles of the previous glamorized decade, but slowly over the years the flower fusion hair style took on a mix of wild 1980’s with some careful touches of elegance.

Jheri Redding invented this style back in the 1970’s and it was named the Jheri Curl, or Jerry curls. It’s a permed style of hair that became hugely popular among African Americans during the 1980’s, and it gave the wearer a glossy and loosely curled look.

The style had a two-part application process which first softens the hair and then set the curls; plus it was easier to care for than other chemical treatments of the time and was marketed as a ‘wash and wear’ style. This hairstyle saw superstardom during the 1980’s when international pop-singer Michael Jackson was seen rocking Jheri curls.

The Side High Tail

The side pony tail went through a number of variations, depending on where you placed it on your head. From being placed at ear level, or slightly higher, valley-girl classic, or straight out of the top of your head, the side high tail was all the rage during the 1980’s with its iconic scrunchie look made popular by stars such as D.J. Tanner.

Even though ponytails have been a hairstyle for centuries, part of what set the side high tail apart was the inclusion of the ‘scrunchie’. This large fabric hair-tie was often coloured in bright neon, or ‘hot’ colours, and gave the side high tail it’s distinct 1980’s look with a fun and carefree attitude. The style was popular among younger girls and teenagers, but plenty of adult women were seen sporting this look as well.

The hi-top fade was a hairstyle that symbolized the golden age of hip-hop and urban contemporary music during the 1980’s and early 1990’s. It’s a style of haircut where the hair on the sides is cut or shaved short while the top is styled to be very long and high. Additionally, hair stylists could take the liberty to shave styled designs around the sides and forehead, which gave the hi-top fade some of its most famous signature looks.

This was an extremely popular style among African American youths, but was also worn by many adults particularly in the music hip-hop industry.

The hi-top fade could qualify as a variation of the flattop that was made popular by emerging rap artist and hip-hop groups such as Salt-N-Pepa, Doug E. Fresh, and Kid ‘N Play. It wasn’t until the early 1990’s that the hi-top fade became the iconic structured look with greater length that symbolized the golden era of hip-hop music.

The nostalgia evoked by 80s hairstyles are the reason they will never truly go out of fashion! Whether you are interested to rock a look for a single evening or want to reinvigorate your look with a retro hairstyle, the 80s has a look for you!

Man or woman, long or short hair, the 80s was notorious for living large, loud and proud, so why not bring it into your 2019 with a version of one of our favorites: the Big Hair or the Side High Pony Tail! Tutorials are readily available on Youtube, and Amazon has all of your hair product needs, so what are you waiting for? Start styling today!