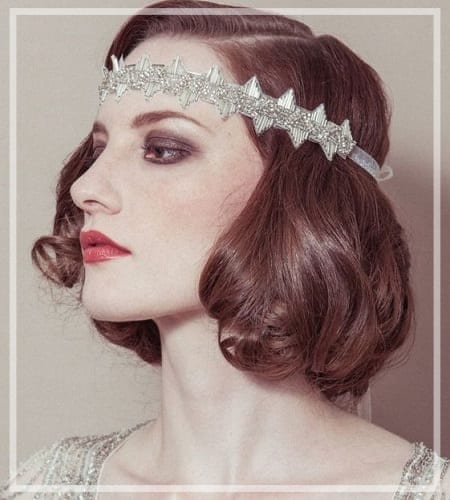 The 1920s are considered the turning point and the decade in which fashion really entered its modern age. So it is no surprise that the 1920s hairstyles were just as diverse as the different periods of this decade.

While the decade started out slow, from 1925 forward, the world accelerated and gave birth to want we now know as the Roaring Twenties and the Jazz Age – a mad period of liberation and fun perfectly reflected in fashion, beauty, and hairstyle trends of the day.

As the world is in its new 20s, we’ve put together a list of the coolest 1920s hairstyles – listed by hair length – so you can take a look at the coolest styles of the past and modernize and bring them to the 2020s and make the cool again!

I. 1920s Hairstyles for Short Hair

The 1920s freed women of the corset and Victorian constraint and as a consequence, everything got shorter, including the hair. The masculine look gained traction among women as they cut their hair short and even styled it in the way all college boys did at the time. After many modifications and alterations, this crop turned into what we now recognize as the pixie cut.

The 1920s also gave birth to the very beloved and frequently worn bob hairstyle. At the time, it was known as the ‘shingles haircut’ or the ‘shingle cut’ or bob cut. It might have been shortened to bob cut because, allegedly, shingling often scared women getting a haircut.

There was also another sweeter, easier, and more tame way to wear a bot haircut back in the 1920s (and nowadays). Instead of going for a very short cut, ladies could also keep it about cheek or chin level and style it with a hairpin, barrette, or other pretty hair accessories.

Although truly just a variation of the look presented above, The Great Gatsby is such a big cultural phenomenon that this hairstyle and styling idea is now most commonly referred to as the Great Gatsby look or the Daisy Look. A word of warning, though: don’t go the Daisy way.

Jean Arthur was one of the movie stars of Hollywood and while she was considered “the quintessential comedic leading lady” she was also regarded as “Hollywood’s reigning mystery woman”. While she recoiled from publicity, her talent and comedic skills brought her to the public’s attention and transformed her into a style icon too.

Anita Page was a very popular, very much loved star of the silent movie era and one of “the most beautiful faces in Hollywood” in the 20s. Searching her will reveal many pictures of her with her blond hair kept short and with upturned tips or downright finger waves. Here, she is wearing the perfect little modern cloche.

Besides becoming increasingly shorter, 1920s hairstyles also allowed a liberation of the hair as this stopped being styled down and forced into the perfect ringlets. Instead, those short-cropped locks were left in their natural texture – be it a straight or wavy one.

The bob haircut rapidly became one of the top-trending styles of the 20s and gave rise to many of its variations that we still know, love, and wear nowadays. The blunt bob, for example, was made popular by actress Louise Brooks – she was also among the first women to sport this cut.

Another very cool and pretty and incredibly simple style to wear your curly hair: just cut it short and let it do its own thing. It goes without saying that this style is incredibly easy to adapt and wear nowadays too!

Don’t be fooled: this is not short hair but instead short to mid-length locks that seem shorter because of their waviness. To make the bob all-around equal bob more defined, the hairstyle adds a deeper side-part to really bring out its best features.

Marcel Waves and Bob Haircuts were a match made in hairstyle heaven! While similar to finger waves, ‘marcelling’ the hair meant inserting hot curling tongs in the hair to create curls even on straight hair. Josephine Baker is one of the most famous wearers of the Marcel waves.

Another way to make the hair seem shorter than it actually was is to gather it all in a low bun made at the nape of the neck and style it accordingly on the sides (puff it up). Add the waves specific of most 1920s hairstyles and a daring red lipstick and you’ve got the perfect retro look!

14. The Anna May Wong Hairstyle

Anna May Wong is considered to be the first Chinese American movie star to gain Hollywood fame and also the first to achieve international recognition. As expected, she was also a fashion icon so it’s no surprise that she is sporting this very cool medium-length hairstyle with the original short fringe.

Another star of the golden ages, Marlene Dietrich is well known for her singing, acting, and ability to reinvent herself. Take a look at this photo and admire one of her most famous looks: the deep side-parted mid-length retro waves in what we know were blonde locks.

Exuberant was the catch-phrase for many 1920s hairstyles and this feather details hair accessory is the perfect exemplification of this. While this might be a bit harder to wear nowadays, you can still adapt it to modern times and wear it beautifully at a special event or for a special occasion.

Pin curls take their name from the one small but very useful piece of gear used in making them: the common hairpin. Namely, you can get looser or tighter pin curls by wounding small strands of hair in a circle and fixing them as tight as desired with a hairpin. Let them rest to set in a curl and then release and have fun with the results!

This medium-length hairstyle is pretty simple by itself – the hair is cut equal all-around the head and only the tips are turned inwards for a curl-like effect. However, what makes this style stand out is the pretty headband worn over the forehead.

One fashion that started in the early decades of the 19th Century and which lasted for a long time was the habit to wear a hat. While the hat styles changed with the decade, this precursor of the cloche was all the rage in the 20s.

There were as many curl styles in the 20s as ways to make them so above, we present to you the kiss curls. These are characterized and can be easily recognized by the fact that the hair curled and fell over the face and was usually plastered down to it. Kiss curls were worn with straight and curly hair alike.

Perhaps not as popular nowadays as other of the 20s hairstyles on this list, it would have been a pity not to introduce and include earphone hairstyles too. They were the perfect alternative for women who still wanted to keep their hair long but also wanted a modern look too.

Fun fact: this hairstyle got its name from the first type of earphone people used to wear to listen to the news back in the days of radio broadcasts.

Although it took longer to obtain them, Marcel waves were also achievable and looked just as pretty on long hair as they did on short and mid-cut locks.

The Gibson tuck is one of those hairstyles that seem incredibly complex yet is actually pretty easy to make. Its history goes as far back as the Edwardian period but it became really famous thanks to Charles Dana Gibson (hence, the name). Since then, the Gibson tuck has continued being a staple among special occasion hairstyles.

You can use pin curls in an updo and with long hair too! Just check out this pretty long hair updo that uses one big and loose pin curl to really stand out. The fact that the tips of the hair are significantly lighter is also very prettily brought out by this very same curl.

These 1920s hairstyles for long hair, particularly this one, are more of a combination of different hairstyles and cuts brought together for stunning results. Take this long hair updo that has finger waved sides and which adds kiss curls to complete the look.

No need to tell you how to adapt this 1920s style to fit the 2020s – you’re already seeing it! The classy and modern low side bun gets the retro treatment through the addition of the glamorous headband with pouf.

This is a more loosely inspired hairstyle as although both the headband and the waves are retroelements, they are also actually a lot looser. The wavy long hair is left to flow naturally over the shoulders. At the same time, the netted hairband receives a vintage touch by the addition of the flowers.

Fingers waves were most popular with short hair, but they could also be obtained on long locks too; albeit with a bit more effort. Fingers waves were (and still are) made by hand on gel-dampened hair and with some help from a fine-toothed comb.

Marion Davies was a Broadway star, producer, and philanthropist. She is mostly best remembered for her complicated history with the newspaper tycoon William Randolph Hearst.

The term ‘cootie garage‘ is used to describe a hairstyle that had the locks styled into buns so that they would cover the ear. This was a pejorative term and was more commonly used before the bob style boom. Still, it looked very pretty, especially when braided – as in this old photo.

So, Ready to Change Your Look?

This list of 1920s hairstyles goes to show that while there are common elements, these styles are just as diverse as the periods of this tumultuous decade. Their diversity also makes them easier to adapt to modern times and should make finding one that fits your tastes a breeze!

You’ve seen the forefathers of the pixie cut and of the bob, but which of the other 20s hairstyles in this article are you planning on bringing into the 2020s and adapting to make them cool and fashionable again? Comment and let us know!