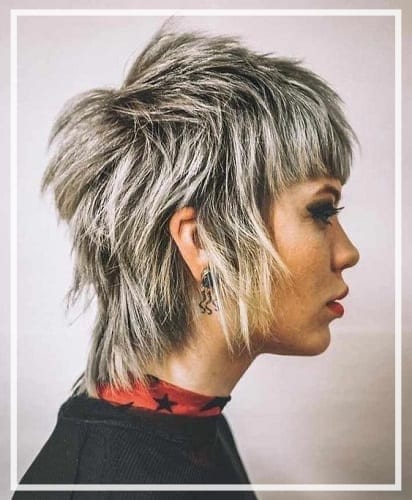 The mullet haircut had a bad rep and both women and men alike started shying away from it after its heydays back in the 70s and 80s. However, we are now going through a true revival of this much-debated cut so we’ve decided to show you some of the best female mullet haircut ideas!

Slide and scroll through this list of mullet haircut and hairstyle ideas and see the many ways in which you can cut and dye it to make it fit your tastes!

We’ll start off this list if woman mullet hairstyles by showing you a very modern take on the mullet. Basically, this is a short shape up mullet kept shorter than usual even in the back and which features shaved sides as well. Another element that really makes it stand out is the silver-gray color.

We call this the mohawk mullet because the hair on top of the head – which usually lies flat on the crown – was spiked and styled to resemble a mohawk.

In true punk hawk fashion, the sides of the head were shaved so that all attention would fall on the top of the head. Also, like in the first example, the hair was dyed silver and provides a superb contrast to the naturally dark back and sides.

As first show through the mohawk mullet above, you can combine a woman mullet cut with other styles and even cuts as well. Take this photo, for example, as inspiration for how you can wear a bob mullet. In this case, the typical bob cut also brings to mind another childhood “classic”, the bowl cut – but also with a modern touch to it.

Another simple yet very effective way to make a mullet stand out and become more your own is by adding highlights to it. You can do so both on the bangs and on the long back or at the tips of the hair. In this photo, see how the purple-magenta highlights outline the shape of the mullet cut.

Neve Campbell has wowed out with hairstyles and cut for everything from short to long hair. The actress flawlessly wore each of these lengths – usually with wavy hair – and at a moment, even sported a very cool mullet cut. She styled this with a very subtle side part and slicked down hair.

This is a very androgynous take on the mullet haircut as this shape can be easily worn by women and men alike. The pretty one went for the classic shape but textured the hair and added some very subtle layers – these can help add natural volume to all locks, no matter the hair texture.

While we’ve already seen several examples of how you can sport a modern mullet with shaved sides, we are here showing you a more subtle take on this idea. Instead of going for a skin fade or a very accentuated shave, consider fading the sides. Start with a more accentuated shave just above the ear and let the hair grow progressively long as it advances to the top.

This female mullet has a lot of volume on top and without being pouffy. Its extra volume is given by the fact that the hair was cut in many layers of different lengths. Longer layers are left on the sides to accentuate the mullet shape while the layers on top are short and numerous. Just as the bangs, they are also choppy for a more edgy look.

Somewhat similar in the cutting technique, but oh so different in the results. This is another very layered and textured mullet, but this time, the hair on top was styled to resemble spikes. The fringe is cut into a V-shape while the long back hair was dyed in red and blonde.

Coming back to a somewhat tamer mullet hairstyle, the really stunning elements for this cut are actually the unexpectedly long sideburns. Instead of being cut close to the ear here, they were left almost as long as the back. The hair is color is also a thing to admire as it combines shades of gray and silver with ash-blonde, all on a dark base.

Zendaya is a hairstyles goddess and a true chameleon as she’s worn many and very diverse styles over these past few short years. Here, she is the perfect example of how you can wear a two-tone mullet, one in which the colors seamlessly blend into one another.

Back in the day when the world did not yet know her as the kickass Black Widow and a redheaded goddess, Scarlett Johansson also briefly wore a very shaggy, layered, and choppy mullet. It has a sort of rebellious teen vibe to it that Scarlett seamlessly pulls off either way.

Smells like teen spirit, so let’s discuss punk – the punk mullet, that is. Punk hair is famously diverse and excentric and all over the place (in some cases) so the mullet can be the perfect base for the raised crown of the head classic punk style. The one above was subtly brought to attention through some mint green overtones.

Movie legend Jane Fonda had an equally famous hairstyle back in the 1970s, one that is now iconic for both her career and beauty, in general. It marked her passage from long, blonde locks and a somewhat bombshell look to the unwavering, decided feminist and activist badass she was and is. The actress herself stated that the shag-mullet marked a new era for her.

Speaking of famous women and their famous haircuts, this list just wouldn’t be complete without Joan Jett. The queen of rock’n’roll has been sporting a mullet shag or shag-like mullet ever since her days in The Runaways and up to this day.

We spoke of the queen of rock’n’roll, now we move on to the actress that portrayed her in the 2010 movie, The Runaways. Kristen Stewart ditched her long brown hair, the one she wore for Twilight and went all rock for her 2010 role. She hasn’t stopped since as she’s been wearing very cool cuts ever since.

Before going all makeup-free and fully embracing the natural movement and look, songbird Alicia Keys also sported this very sleek and elegant version of a mullet with shaved sides. Only one side of the head was shaved and faded while the other was styled in a faux-pomp.

From one singer to the next and surely not the last one on this list, admire Rita Ora and the very cool and edgy way she wore a mullet. Besides its shag-like style, this is a very classic mullet cut that draws in the eye thanks to its color: the very cool white blonde.

Here is another mullet that attracts attention thanks to its colors and many shades, more so than even the cut itself. This is because this style plays around with the two-tones trends and has the top of the head dyed bubblegum pink while the tips of the hair are yellow. There are also some subtle pastel pink and yellow shades for a smoother transition.

See life in pink, always, by going for a very pretty pink hair color. All eyes will be on this very cool look that mixes different shades of pink and which ends in almost white tips. It’s also a great way to sweeten up a very punk alternative look and make it look more feminine.

The fringe is one of the defining elements of the mullet and just can’t miss from this cut – but that doesn’t mean you can’t play around with it too! Take a look at the different types of bangs to pick the one you like best or add a twist to the classic fringe by cutting it asymmetrically and leaving some longer strands. You can also cut it in a V-shape or waves, for example.

If the classic mullet cut is not edgy or special enough for you then pick the ultimate modern woman mullet by cutting it asymmetrically!

Pick one side of the head and cut the hair very short there while leaving the rest of the hair fall naturally on the opposing side. Cut layers of different lengths on top and dye the crown of the head in another cool for the ultimate out-of-the-box look.

We’ve already mentioned it a few times, now it’s time to show it in all its glory: the shag mullet. Combining these two cuts is one of the easiest ways to modernize both as you will be taking the coolest elements of each and bringing them together for a head-turning hairstyle!

Rest assured, the mullet cut is not only reserved for straight-haired women as curly-haired ladies can beautifully sport it too! Take the image above as an example of how you can wear a woman mullet even if your locks are very curly – it works for wavy hair too!

Other bangs, another look! By going with baby bangs instead of the usual fringe, you will be completely changing the look of your mullet. It will also go to show that you are on top of all style trends – especially if you also dye your hair in one of the coolest shades of these past few years.

We’ve talked and show various ways to wear a modern mullet but it is just as important to know where it all began! This is a classic mullet look as women used to wear it back in the 1980s. The hairstyle is easier to place partly thanks to the voluminous, permed top – an iconic element of almost hairstyles trending in the 80s.

And we’re back to modern times and showing you the rise of the mullet among the younger generation – all thanks to Billie Eilish and by mistake.

When asked about it, the singer revealed that the new style was actually an accident after a bad experience at the salon. While she declared she wouldn’t be keeping the look, Billie was nonetheless a source of inspiration on how you can wear a modern mullet for women.

While most people expect to see short mullets and usually wear it mid-length at its longest, this haircut can also look just as good on long hair. This longer version is also a more subtle one as gathering up the hair will almost completely hide away the mullet shape.

Another style chameleon, Yolandi Visser of Die Antwoord is here to wow us with yet another extravagant hairstyle. She is also wearing a mullet for long hair, but one that is perfectly straight and which was further accentuated by the baby bangs and short and choppy hair on the crown of the head.

We’ll end this list of woman mullet haircut and hairstyle inspiration with none other than Rihanna. A true fashion guru, she’s sported many hairstyles, lengths, and color throughout the years but this has got to be one of her punkiest, edgiest, and coolest ones yet!

So, Ready to Change Your Look?

This was it, our list of the best and coolest woman mullet looks that hopefully convinced you that this can be a good hairstyle and not the fearsome thing it was a while back. As you’ve seen, there are many ways to cut it to fit your style and even more ways to dye it and personalize it.

That being said and done, did you like any of the styles on this list? And if you didn’t, what did you find upsetting about them? Comment and let us know!